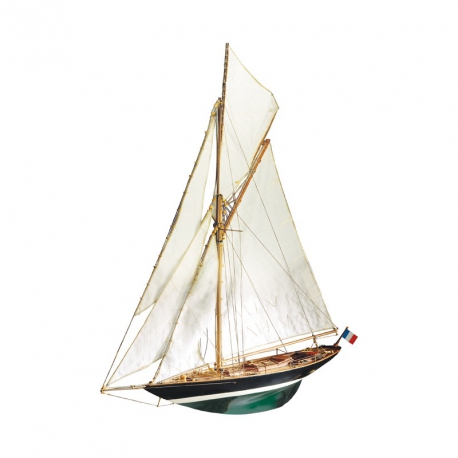 This product is no longer in stock

Wooden model kit of racing cutter Pen Duick in 1/28 scale. It includes detailed instructions in 4 languages and all the pieces the model needs, wood, threads, sails...

Discover the Pen Duick, a wooden model of the legendary Eric Tabarly racing cutter. Saved from misery by Eric and his father when the former had only 7 years, the Pen Duick was the first of a series of boats with which Tabarly won many victories in various races. Guided by our detailed step by step instructions you can complete your model of this legendary ship.

Born in Nantes in 1931, Tabarly developed from childhood a passion for the sea and sailing. He got great victories and sprayed records in a time when anglo-saxons dominated ocean races. Far from relaxing in the glory he continued to build ever more efficient ships and winning races. He met his end by disappearing in the waters of theEnglish Channel when steering his old Pen Duick to participate in a regatta of classic sailing in Scotland.

Build your 1/28 scale model of the Pen Duick, a mythical racing cutter. Its construction system using false keel and frames brings the assembly of your model closer to the construction of the actual ship. The model includes laser cut board pieces, hardwood, brass, die-cast and fabric. For the assembly you can follow our complete full-color step by step guide in 4 languages, accompanied by real-scale drawings of the ship.